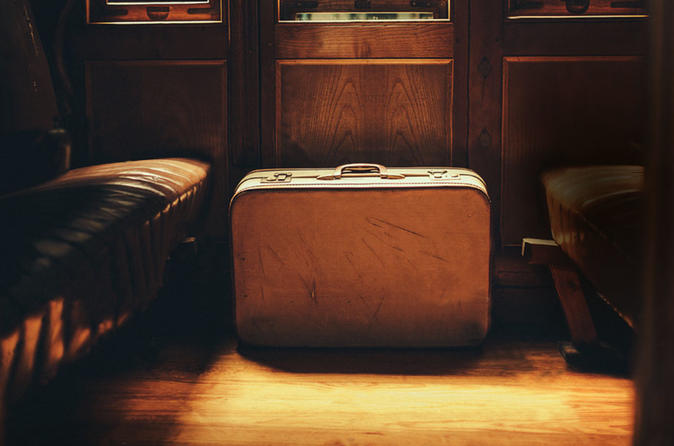 Enjoy the award-winning Escapology live escape games. This package lets you attempt to solve "Budapest Express." You have an hour to find who killed Sir Clarence Hayden before the train stops and the killer evades justice.

Onboard the famous trans-European Budapest Express, you are with Karine Peaufiner, a famous French detective from Paris. You are traveling to Budapest to meet with other detectives showcasing the latest developments in crime scene forensics.

It is nighttime and you are passing slowly through the heart of Europe during a heavy snowstorm. You are reviewing case notes in your cabin with Karine and your colleagues. Suddenly there is a knock at the door, it is the train manager.

He looks worried and asks you to come quickly to the First Class dining coach. When you arrive, you see a man slumped over a restaurant table. He was Sir Clarence Hayden and he has been murdered!

The manager informs you that in one hour the train will stop at the next station, if the killer hasn’t been apprehended, they will be free to escape into the night and get away with this horrible crime!

Your reputation as brilliant detectives precedes you, he asks you to solve the crime so the murderer can be caught and brought to justice. You’re able to narrow down 5 suspects who were seen in the dining car around the time Sir Clarence was murdered. They are: his widow, Jessica Mauer (51), a frequent business partner, Tatsuhiro Kato (54), a passenger from Switzerland, David Hans (41), the server from the dining car, Edwin Hamme (45) and, the famous actress Carmella Boni who...declined to give her age (??). Each of them had a relationship with the deceased and each has a motive to murder Sir Clarence.

Moving through the cabins and gathering evidence, the killer knows you are hot on their trail and has decided you are their next target. With you out of the picture they would be free to escape when the train stops.

Solve the riddles and puzzles, gather the evidence and solve the murder before it’s too late!

Do you have what it takes to find the killer before they find you? Time is of the essence!

Please Note: All rooms are private so you will never be teamed up with other players!

Enjoy the award-winning Escapology live escape games. This package lets you attempt to solve "Budapest Express." You have an hour to find who killed Sir Clarence Hayden before the train stops and the killer evades justice.